Forget the corruption jibes against Italian, Eastern European or South American football. It has become increasingly evident in recent years that Scottish football is rotten to the core.

Is it a coincidence that all three bodies have contrived in recent seasons to materially affect the outcome of the Scottish Premier League Championship in favour of Rangers? And, today, true to form, they continue their naked corruption with the approval of the Scottish news industry.

Cast your mind back to the end of last season where one extension was not enough for Rangers. In an unprecedented act of duplicity, the SFA's (former Rangers player) Gordon Smith and George Peat secretly met with Rangers officials and offered to move the date of the Scottish Cup Final, briefing the Daily Record in the process to present the move as a fait accompli.

In doing so, they disregarded the rules of their own association without consulting any member clubs, including Queen of the South who were Scottish Cup finalists. And crucially, this move could not benefit Rangers in their UEFA Cup final campaign – it could only benefit their SPL challenge.

The attempted intervention was an outrageous act of duplicity yet acting against the interests of one of the competing member clubs – Celtic, of course – was allowed to pass without censure for the officials.

At the same time, the SPFA's (former Rangers player) Fraser Wishart, a man paid as a trade union official under the umbrella of the GMB, actively supported a full season extension, again without consulting his members, even though it was against the interests of those who paid his wages.

Take any unionised company or organisation in the United Kingdom and see what happens when they arbitrarily announce, at short notice, an illegal reduction in holidays without consultation. Any union would immediately threaten action. But Wishart, acting in favour of Rangers against the interests of his own members, actively supported an extension that could see hundreds of players having to cancel holidays without compensation, never mind affecting European Championship preparations, all for the sake of trying to help Rangers win the SPL.

No reference has yet been seen in the Scottish mainstream media querying Wishart's role or, for example, his publicly disavowing the actions of his own members when they happen to play for Celtic. In any real trade union, he would have been dismissed.

The SPL, led by (former Rangers player) Lex Gold, at the time agreed to one extension, specifically defying UEFA's continent-wide instructions to finish the season on time due to the Euro 2008 championships. It was a move that was opposed by Celtic and defied the SPL's own rules but it was largely supported by the mainstream media in Scotland, those who like to claim they are the arbiters of common sense, even if their diction and attire suggest that most of their “journalists” would be better suited to selling knocked-off bottles of suntan lotion.

This season, the SPL contrived to allow Rangers to play Scotland's third-best team, Hearts, three times at Ibrox Park, excusing the actions in such fanciful terms that they could only be believed by a proponent of the seven-day-creationism school of science.

Again, this materially affected the run-in to the SPL and was largely supported by the Scottish media.

Further hitherto unheard-of actions have been undertaken by our referees. For the first time in several decades, referees have been publicly punished for “dubious” decisions, the head referee, Don McVicar having abandoned his practice of defending officials in the face of club attacks when decisions were seen to go against Rangers or in favour of Celtic.

The most obvious example of this was the removal of Iain Brines (who has no fan on this blog) after accusations emanating from Rangers that they had been hard done by. This is the same club whose former manager in his “132 years of unsurpassed dignity” rant insisted that nobody at Rangers would ever question the integrity of an official.

Walter Smith publicly implied bias by assistant referee Tom Murphy, again without sanction or comment from McVicar, even though he was forced to send Murphy a written apology which was unreported in the Scottish newspapers and broadcast media.

Finally, in recent weeks, two Celtic players have been referred to the SFA to consider further sanctions over incidents that referees thought unworthy of attention at the time while we are now told that the Rangers and media campaign to free Madjid Bougherra for the last match of the season has been successful.

This is in the face of one of the most appalling pieces of cheating by a footballer in recent years, Kyle Lafferty's dive to have a fellow professional sent off and regardless of the fact that Bougherra's studs are clearly shown to have made strong contact with the head of Aberdeen goalkeeper Jamie Langfield. Smith and Smith have clearly been in consultation again as the SFA Chief Executive has now praised the Ibrox club for fining Lafferty in a move that was intended only to pave the way for Bougherra's reinstatement.

And let's not forget Rangers' flouting of international anti-doping legislation in using pain-killing injections to allow them to field injured players or the dismissal by Gordon Smith of Rangers fans racist chanting, even though it strained international diplomatic relations between the UK and Ireland.

In the meantime, Celtic officials remain silent, save for one letter requesting “clarification” of the SPL post-split schedule. We have a former Home Secretary as Chairman, who apparently sees fit to allow the combined forces of Rangers and their allies to continually move the goalposts for the benefit of the Ibrox club.

We have a billionaire major shareholder, who may or may not be aware of these things from the sun-drenched tax haven of Gibraltar and we have a Chief Executive who has learned from Reid to keep his head down when there is flak flying, regardless of the detriment to the club that pays him handsomely.

It would appear that the parlous state of R-word's finances have led to desperate measures by the Scottish football and media fraternities to support them, rather than observe fair play. Celtic should – but won't – refer the entire matter of the administration of Scottish football to UEFA.

It seems that only Celtic fans have the interests of Celtic at heart.

Posted by TheCeltsAreHere at 6:26 pm 2 comments: Links to this post

Yesterday, at Ibrox, Aberdeen's players fought strongly for their first victory at that ground. At 1pm today, Hibernian will host Celtic, fully intending to fight tooth and nail to undermine our title ambitions at least as severely as they did to Rangers with a 1-1 draw at Easter Road.

Move forward seven days and Hearts, who in Csaba Laszlo have a strong candidate for manager of the season, will try just as hard to ruin the end of our season while Craig Levein's Dundee United can be relied upon to strive to make life at least as difficult for R-word as they did for Celtic in a nerve-wracking encounter at Celtic Park.

It should be no other way. The Aberdeen players, along with Hibs, Hearts and Dundee Utd – and, of course, Celtic – still recognise some basics of sporting integrity; still maintain pride in their performances and in their clubs.

How strange it is that the club most fêted (or perhaps that should be foetid) by the media and by the Scottish football establishment should have such scant regard for the sporting ethos.

Those whose claim to know is based on receiving wage packets for writing such tripe will tell you that Walters Smith is a beacon of integrity. Nevertheless, his teams have been remarkable for a devil-may-care attitude to ethics, epitomised by his faith in Ally McCoist, one of the most cynical and unrepentant cheats the Scottish game has known.

Then came Kyle Lafferty. A typical Smith signing in that he has been as abysmal a performer as he was expensive, Lafferty first fouled, 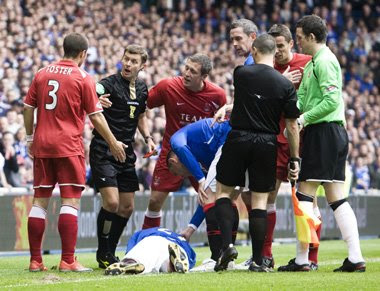 then brazenly cheated to have his fellow professional Charlie Mulgrew sent off, to the tumultuous roars of approval from the Ibrox horde. It was, to date, his most significant contribution to Scottish football and indicative of the type of character who grows up in the Ibrox tradition.

Smith's promise to “have a word” was, some might suspect, more in hope of legitimising his claim that Madjid Bougherra's studs making contact with the Aberdeen goalkeeper Jamie Langfield could not possibly warrant a red card. 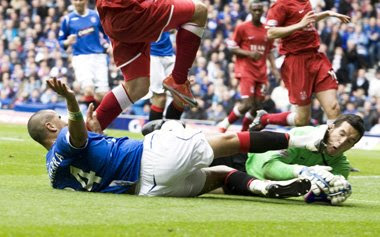 Special attention is also due to the referee. Stuart Dougal, fresh from claiming not to have seen an incident between Scott McDonald and Lee Wilkie, despite having taunted Wilkie as he lay on the ground, apparently invites us to believe that he thought Kyle Lafferty had been violently assaulted.

But there is a flaw in the story – as photographs suggest. While Lafferty lay motionless, on the ground, he was simulating the symptoms of someone who had suffered a severe head injury. Curiously, Dougal was happy to deal with the mêlée without summoning the medical assistance that such health risks routinely require.

Not so when Langfield was injured, at which point the player was quite rightly given attention. 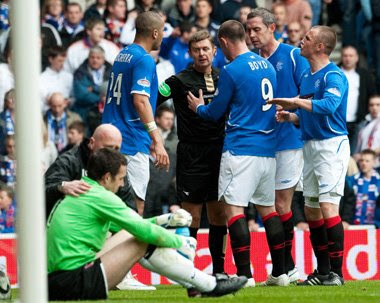 So might Mr Dougal be asked why, if he truly believed that Lafferty had been butted, he was happy to stand over the player doling out his unique interpretation of justice?

Over the next eight days, Celtic will neither ask nor give quarter to any team but rather simply ask for fair contests officiated in a professional and impartial manner. All of our players can be expected to conduct themselves better than to besmirch the hoops by “doing a Lafferty”.

Individual allegiances aside, we can confidently expect the other clubs to be impartial, meaning that our players must take victory without favours or underhand tactics. Anyone who cares for fairness in sport will be willing us on.

Posted by TheCeltsAreHere at 1:57 am No comments: Links to this post

Masks, Nazi salutes, Scott Sinclair attacked – all in the name of The Rangers and the Union Bears